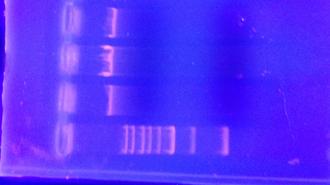 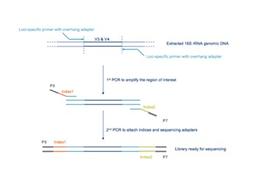 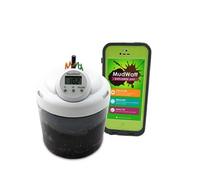 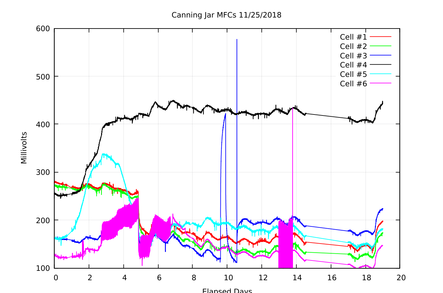 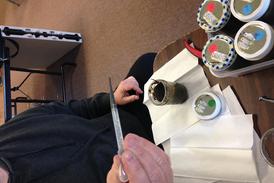 16S Sequencing of the Mudwatt

The Mudwatt is a commercially available microbial fuel cell designed for educational purposes. Soil from all sources contains many microbes, and the anaerobic metabolism of bacteria in the bottom of the Mudwatt generates excess electrons.  The Mudwatt contains a cathode and anode which uses these electrons to generate an electrical current; an LED at the top of the Mudwatt can be powered using the electricity generated by these bacteria.

A series of custom Mudwatts assembled by one of our colleagues (Pete Soper) is shown below.

The electrical output (in millivolts) of these 6 Mudwatts is being followed over time and a recent time lapse is shown below. Clearly one of these (cell #4) is outperforming the others.

One of our recent projects is the 16S sequencing of Mudwatts. This will allow us to determine the microbial composition of the various Mudwatts that we have been running, including, hopefully, the identification of candidate electrogenic bacterial species that may be powering the Mudwatt.

The 16S ribosomal RNA (16S rRNA) is a part of the ribosome. Ribosomes are composed of both RNA and protein subunits. Ribosomes translate mRNA into proteins are present in all living organisms and very well conserved. Eubacteria and Archaea contain a 16S rRNA while Eukaryotes contain a slightly larger 18S rRNA; both have an conserved function in the structural organization of the ribosome. More detail can be found here.

The 16S rRNA is an approximately 1500 base pair sequence with both conserved and variable regions.

The conserved regions are well conserved among diverse bacterial species while the variable regions are more species-specific and can act as a barcode to identify bacteria (both eubacteria and archaea) at either the genus or species level. The commonly used technique is to use PCR primers based in common regions to amplify across one or more variable regions (V3 and V4 in the diagram below) and then sequence across the variable regions. If sequenced deeply enough with Illumina technology, a high quality measure of species diversity, and a quantitation of abundance can be derived. A good example of such a soil microbiome analysis can be found here.

The DNA protocol attached  here  has been tested on various mud samples and gives good quality genomic DNA. This is based on the attached paper. Anexample gel is shown below on the right. Lane 1 (bottom-most) is a 1 kb DNA ladder. Lanes 2-4 above this are samples from a mud sample obtained in Durham and samples from the surface of two different Mudwatts that have been operating continuously for over 6 months. The high molecular weight band in each lane is indicative of high quality genomic DNA. On the left is a disassembled MFC from which mud is being extracted for our DNA prep.

For sequencing, we sent two DNA samples (cell #3 and 4 from the time course above) to two companies, Step Biolabs and ​Novogene for Illumina MiSeq sequencing. We chose these since cell #4 was producing significantly more current (in mV) than the other 5 cells, and #3 was a sister cell set up at the same time as #4 and thus the most appropriate control. Step Biolaps returned high quality sequence reads for both; for cell 3 ,140,320 paired end reads and for cell 4, 115595 paired end reads; the Novogene sequencing is still in progress.

We analyzed the Step Biolab data with QIIME 1.9.1 using the SILVA database. We found no statistically significant differences between the populations or abundances of bacterial species in each, but did identify over 800 different OTUs (operational taxonomic units; a proxy for species) in each. Geobacter, a well studied electrogenic anaerobe was found among the top 20 most abundant species in each sample. A summary of the bacterial content of each cell can be found in the spreadsheet at this link. 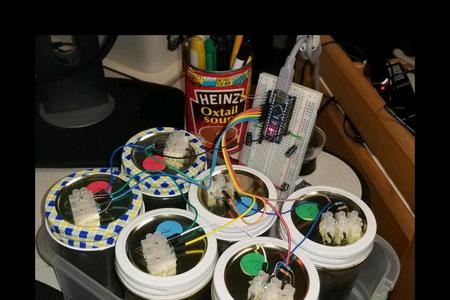